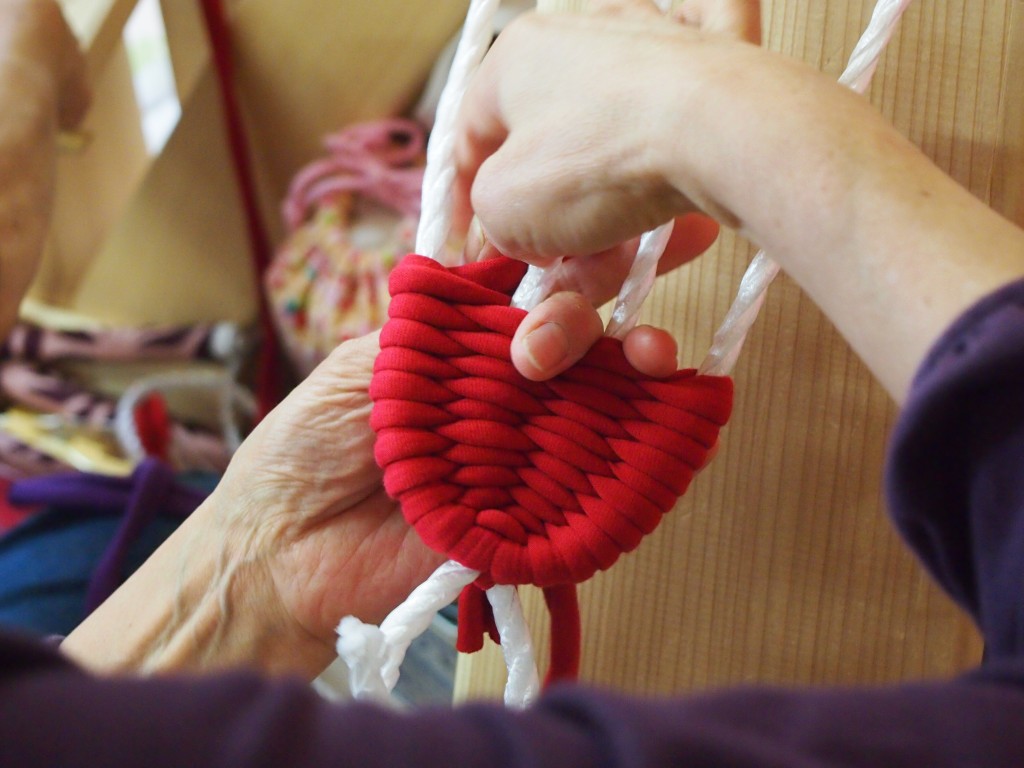 On March 11, 2011, unprecedented “The Great East Japan Earthquake” attacked the East Japan and the coastal districts suffered so serious damage by the huge TSUNAMI. Triggered by this Great Earthquake Disaster, peoples for the purpose of the stricken area supporting have gathered then [Project Fumbaro Eastern Japan] (below “Fumbaro”) has been established and they have been performing various kinds of supports depending on the situation of the stricken areas. 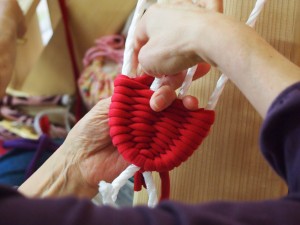 In 2011 August, the members of “Fumbaro” who have felt that “the definite aim supporting” was necessary in the stricken areas planned to open the Handmade Workshop at Minami-Sanriku. Because it can get absorbed in it while it does handwork, member does not remember unpleasant things, moreover it is also a chance to make new community to gather fellows together again. One of those Handmade Workshops planned in that way was the class of making with Nuno-Zouri (Cloth Sandals). The teacher of cloth sandals studio "Cotton Bs" located at Yokosuka has kindly held a Nuno-Zouri (Cloth Sandals) workshop. 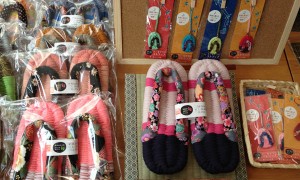 As a woman who participated in this class was so interested in Nuno-Zouri and told, "I want to try selling this if I will become good", thus the project to support the making of Nuno-Zouri (Cloth Sandals) in “Fumbaro” stood up. Then they have established the party of Nuno-Zouri named Minami-Sanriku Fukkura-Kai, and have begun to study about Nuno-Zouri eagerly. Afterwards, they have promptly educated remarkably and became to be able to sell their works as “Minami-Sanriku Fukkura Nuno-Zouri” at the end of the year. Under the kindness of Mr. Amon Miyamoto in 2012 January, they could sell their own made Nuno-Zouri at the lobby of the musical [I GOT MERMAN] in the Theatre Creation. It became the popular item of which be sold as soon as it will once delivered.

Just in those days, the voice to require holding the class of Nuno-Zouri has reached to “Fumbaro” from Rikuzen-Takata. Ota temporary construction, it is the final one as the temporary housing in Rikuzen-Takata. As it is very small temporary housing number scale, there has been almost no support and many of inhabitants have been staying inside of own room. They have been looking for some workshop enactive to earnable handwork by gathering in their meeting place, thus they seemed to like to do Nuno-Zouri making by all means. Whence on January 21st, we have performed the class of Nuno-Zouri (Cloth Sandals) making for the first time in Rikuzen-Takata. It was so small meeting place where has only one household unit unlike other temporary housing constructions. Fifteen (15) mothers gathered in such space, and they have taken the lecture class of Nuno-Zouri so eagerly. Mothers said “I did concentrate on it after a long separation!”, “If there was not such thing, we could not have a occasion to talk each other ---“, as there are great excitement and heat, the heating supply was not necessary there in spite of the midwinter. Thereafter they were allowed to put the materials of cloth sandals in such meeting place and became to knit their Nuno-Zouri (Cloth Sandals) together.

There are many voices such as [I can omit disgusting matters while knitting Nuno-Zouri.], [That Winter was over while I thought that the next would make what kind of color, to make which kind of Nuno-Zouri.], [I really can trust that I have been alive by the grace of Nuno-Zouri.], like this new team of Nuno-Zouri was born in Rikuzen-Takata as well.

Afterwards, we have carried out more classes at Ishinomaki in April and at Higashi-Matsushima in May. Until end of the year 2012, around totally 25 persons of Nuno-Zouri knitter/craftswomen were brought up at Minami-Sanriku, Rikuzen-Takata, Ishinomaki and Higashi-Matsushima. And we are expanding the ring of circle for Nuno-Zouri with expert knitters always doing advice for new faces. 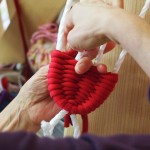 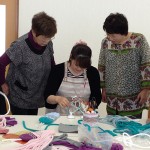